When you’re deciding which mascara to buy, what hotel to book into or what car to save up for, who do you listen to more - a brand, or a fellow consumer who recommends the product / service ?

We’re more likely to take recommendations from our friends rather than from pushy brands when it comes to making a purchase because we know and trust our friends. This concept forms the basis for User Generated Content on social media. UGC can be defined more specifically as any type of content that has been created and put out there by unpaid contributors. These contributors or “fans” post on social media about a product they love and other consumers are then encouraged to make the same purchase having seen it advertised by a “real person”. UGC refers to photos, videos, tweets, blog posts… Anything where the user is promoting the brand rather than the brand doing it for itself. UGC is a free form of advertising where the user takes on the brand’s advertising duties, thus making the user the brand’s advertiser.

According to a report by Olapic on the significance of User Generated Content for Millennials and Baby Boomers, 76% of the population surveyed said they trusted content shared by “average” people more than by brands. UGC is increasingly prevalent on Instagram, with users posting photos and stories, promoting a particular brand and tagging them in their post. This content is thus available for promotional use on their own accounts. They can give credit to the users, and also show how their products are being used and loved by “real people”.

3. How BMW employs UGC campaigns into their marketeing strategy

Different companies are becoming more and more involved in UGC campaigns to increase brand awareness and boost their conversions. Automotive company BMW uses #BMWRepost to share Instagram posts of BMW owners and their cars, in order to drive their sales. BMW’s target market are those with an interest in the automotive industry and / or with disposable income to spend on luxury cars. The company’s User Generated Content campaign gives the owners the opportunity to “show off their achievement”, while simultaneously giving BMW the opportunity to show off their loyal base of customers. Consumers are encouraged to invest, not only in the luxury cars, but also in the opulent lifestyle that "rides along" with BMW. 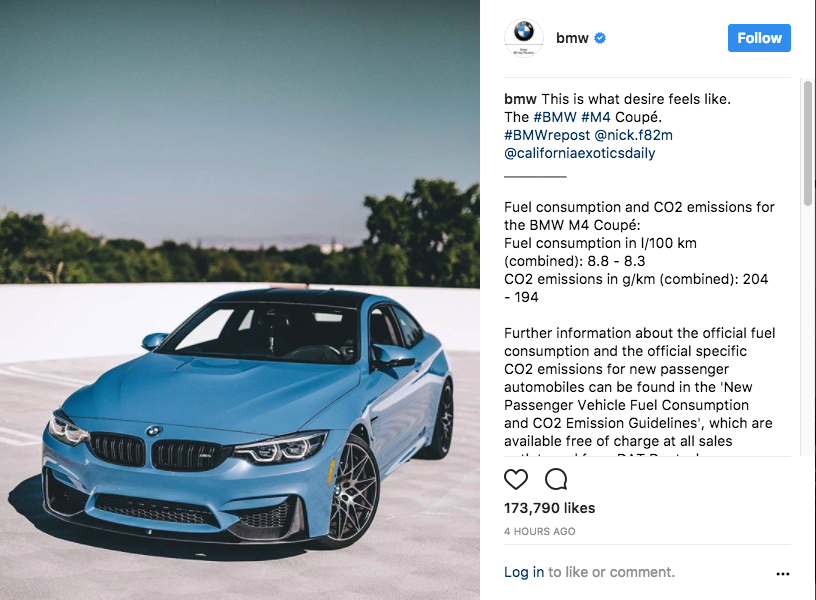 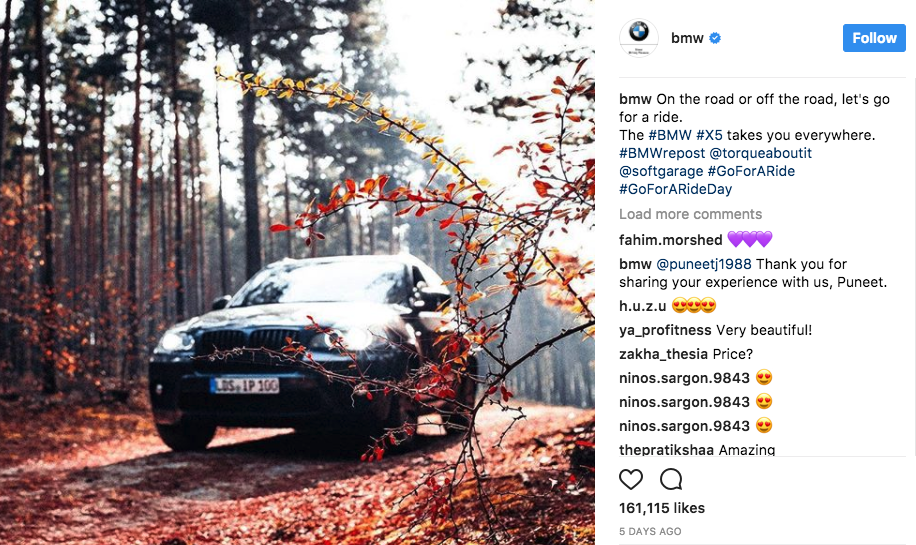 4. Starbucks: One of the most successful companies to avail of UGC

We briefly touched on User Generated Content in our Christmas Guide, with our analyses of Starbucks’ Color-in cups, #RedCupContest and #WhiteCupContest.

Starbucks took a cue from customers who had been doodling designs on their disposable cups for years and initially launched a White Cup contest in 2014, encouraging customers to customize their cups and share them on social media. This was a minimal cost campaign for them to launch, but because of their renowned brand, it proved to be hugely successful. Everyone wanted in on the #WhiteCupContest. For the budding graphic designer it provided an invaluable platform to get their design showcased, and for Starbucks, increased publicity worldwide. 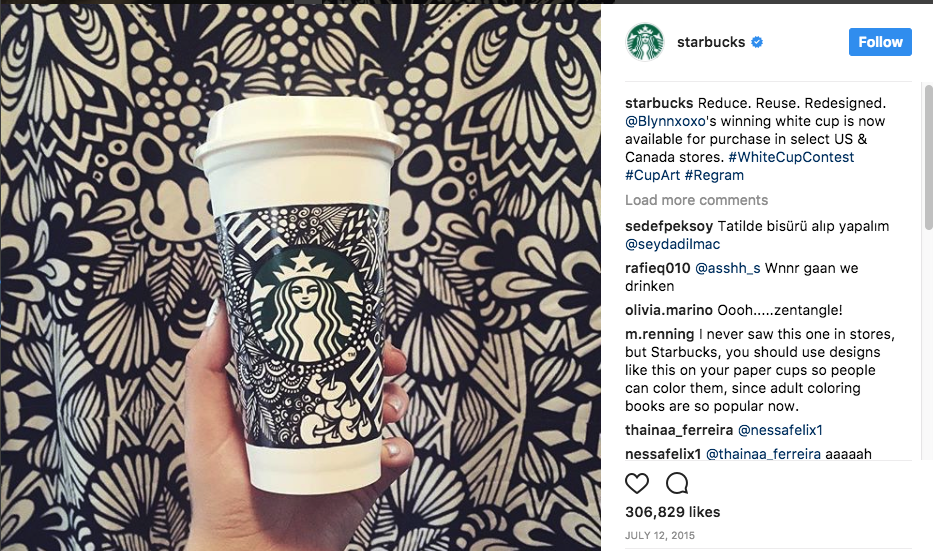 Taking inspiration from the success of the #WhiteCupContest, Starbucks launched color-in cups for their 2017 holiday campaign. The concept originates from the popular adult colouring books for mindfulness and opposes the connotations coffee has for stress. Starbucks chose to add an element of calm to coffee with this year’s holiday campaign, encouraging their customers to pause for a moment during their busy day. 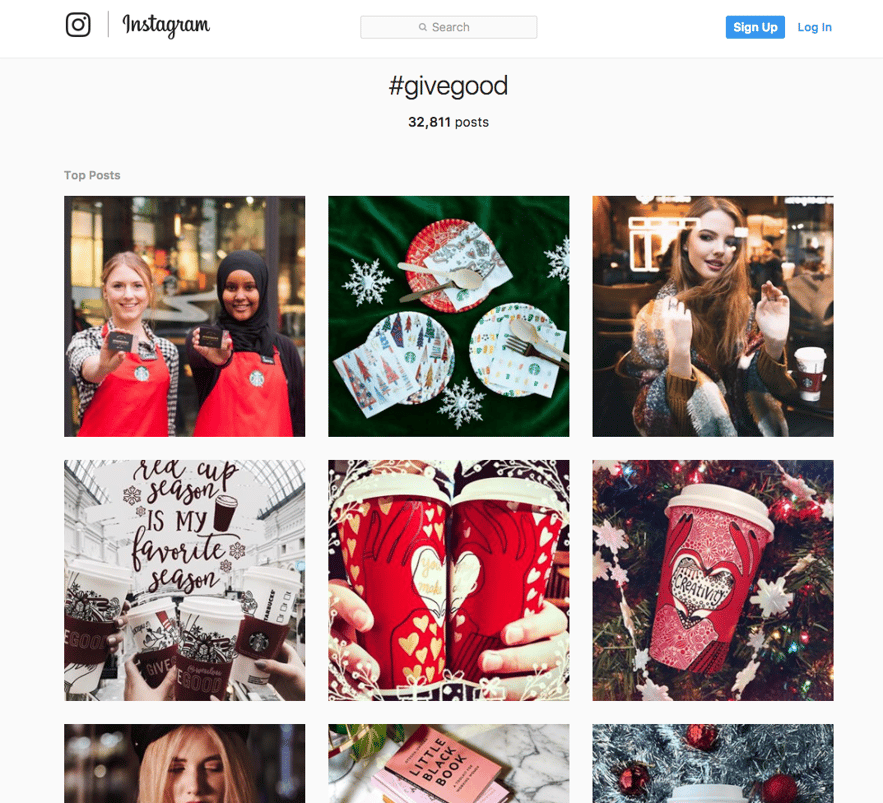 Starbucks' holiday theme this year relates to the gift of giving. Executive creative director, Leanne Fremar said in a press release; “The holidays are a time to celebrate all the good we give to each other and our community.”

Needless to say the #GiveGood campaign is already taking Instagram by storm with almost 30,000 posts using the hashtag. Having just released a second cup design for the holiday season, its popularity on social media is only expected to grow. 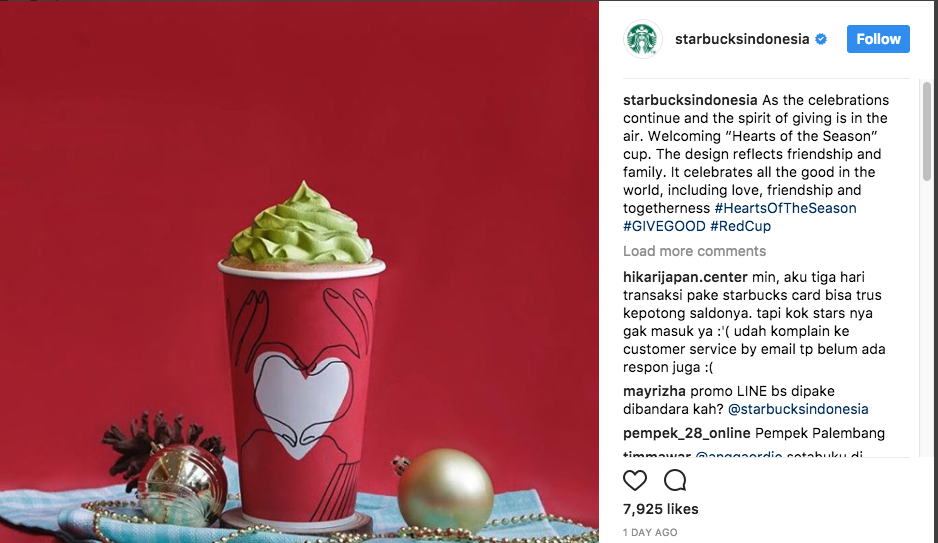 With an Instagram following of over 15 million people worldwide, Starbucks has an undeniably powerful influence on social media. The comfortable lifestyle promoted by their brand, alongside their famous logo, means that with just a little nudge they can spur a worldwide audience to promote their latest campaign.

To discover more about how Starbucks’ uses User Generated Content to drive their sales during the holiday season, download our Christmas eBook now. 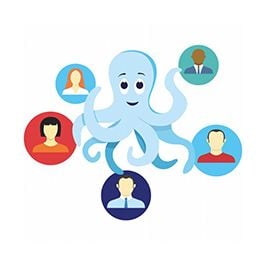